The neuropeptides oxytocin and vasopressin were isolated and synthesized by Vincent du Vigneaud at Cornell Medical College in 1953, work for which he received the Nobel Prize in Chemistry in 1955. The neurohypophysial hormone arginine vasopressin (AVP), also known as antidiuretic hormone, is involved in a wide range of physiological regulatory processes, including renal water reabsorption, cardiovascular homeostasis, hormone secretion from the anterior pituitary, and modulation of social behavior and emotional status. AVP and the structurally related posterior pituitary hormone oxytocin are synthesized in the paraventricular nucleus and the supraoptic nucleus of the hypothalamus. AVP is a 9 amino acid peptide with a 6-member disulfide ring. It is structurally related to oxytocin differing by 2 amino acids. 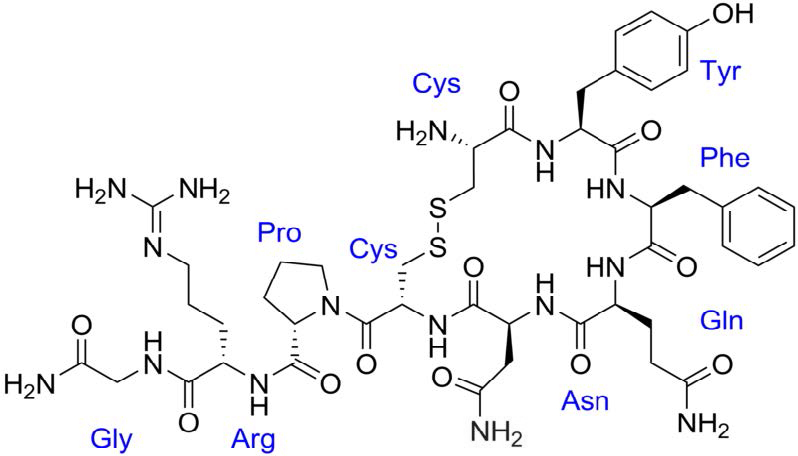 AVP is released in response to sexual stimulation, uterine dilatation, stress, and dehydration. AVP V2 receptors in the kidney are antidiuretic, whereas the V1a and V1b receptors in the vascular tree, adrenal gland, uterus, and other tissues mediate the diverse peripheral effects of this peptide. AVP acts principally on renal collecting tubules to increase water reabsorption. Diabetes insipidus (DI) is characterized by the inability to appropriately concentrate urine in response to volume and osmol stimuli. The main causes for DI are decreased AVP production (central DI) or decreased renal response to AVP (nephrogenic DI). AVP can also be secreted inappropriately in certain situations, particularly in elderly patients, leading to water retention and dilutional hyponatremia. Inappropriate AVP secretion might be observed with central nervous system pathology, such as head injury, stroke, or cerebral tumor, or as a side effect of central acting drugs that interfere with the hypothalamic regulation of AVP. Noncentral causes of inappropriate AVP secretion include peripheral stimuli that mimic central vascular hypovolemia, in particular severe low-output cardiac failure, and ectopic AVP secretion (usually by a bronchogenic carcinoma).

Our Arg8-Vasopressin Chemiluminescent Immunoassay kits (K049-C1/C5) break the 1 pg/mL sensitivity barrier. They are designed to quantitatively measure AVP present in serum, plasma and tissue culture media samples. An AVP standard is provided to generate a standard curve. Standards or diluted samples are pipetted into a white microtiter plate coated with antibody to rabbit antibodies. An AVP-peroxidase conjugate is added to the standards and samples in the wells. The binding reaction is initiated by the addition of a polyclonal antibody to AVP to each well. After an overnight incubation at 4°C the plate is washed and substrate is added. The substrate reacts with the bound AVP-peroxidase conjugate to produce light. The intensity of the generated chemiluminescent signal is detected in a microtiter plate reader capable of measuring luminescence.